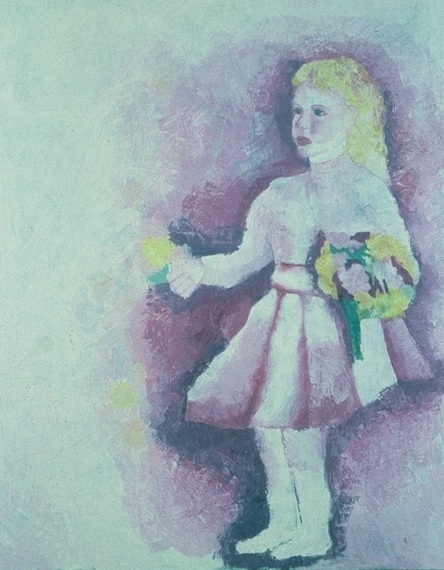 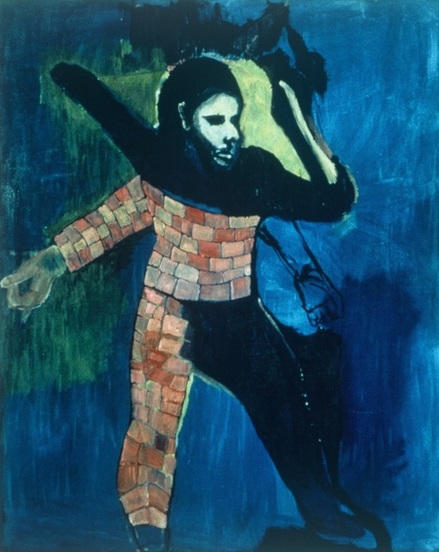 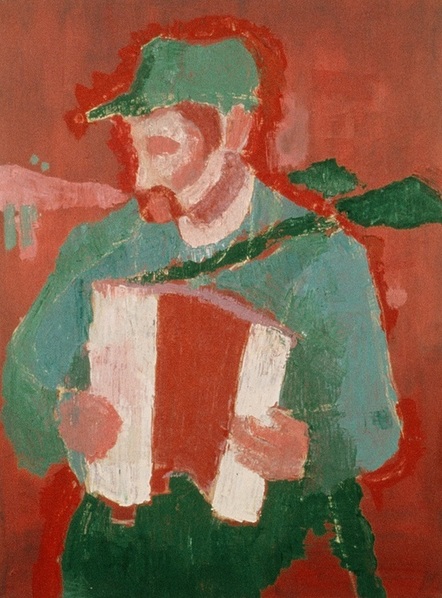 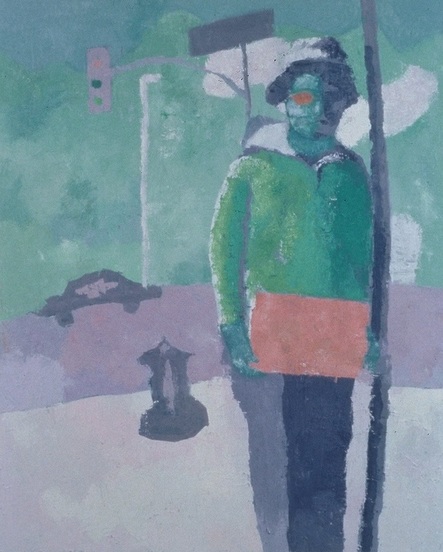 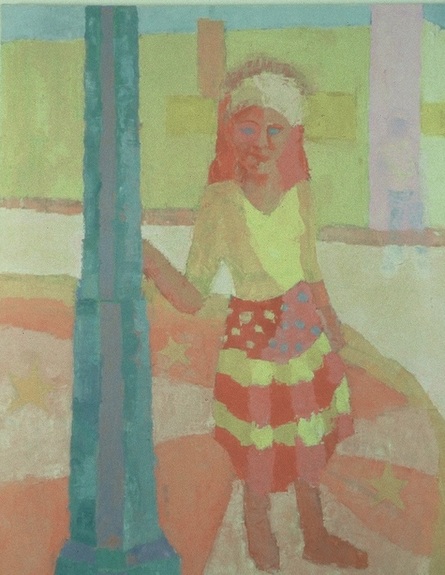 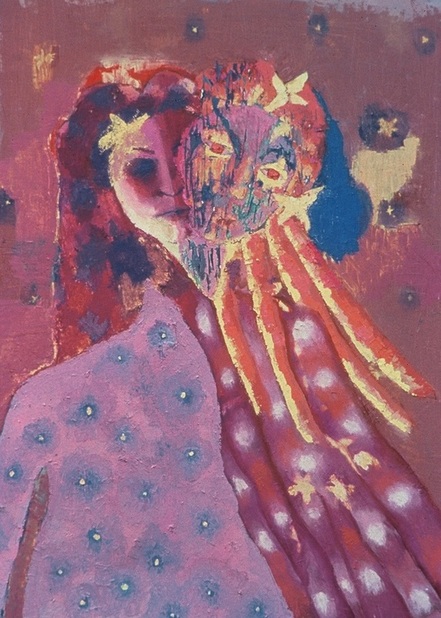 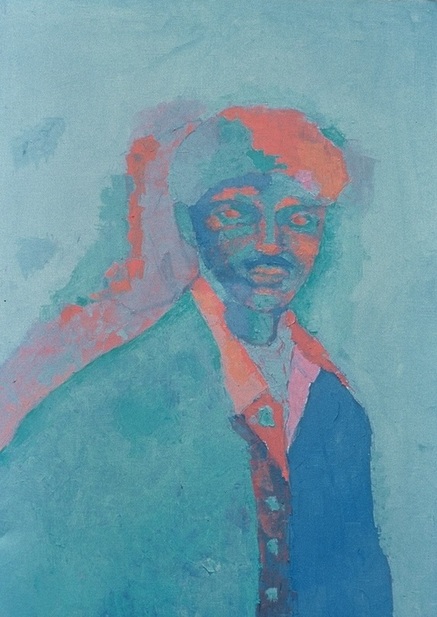 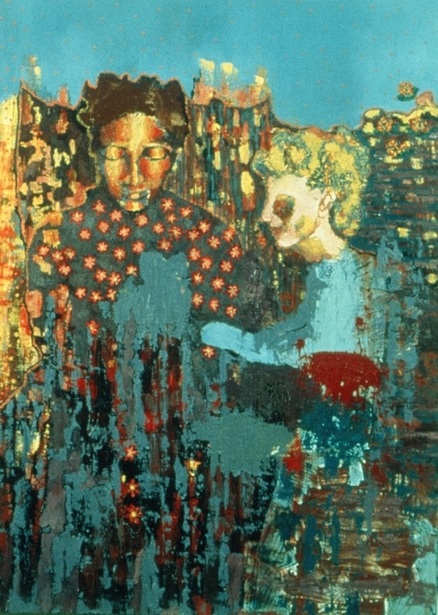 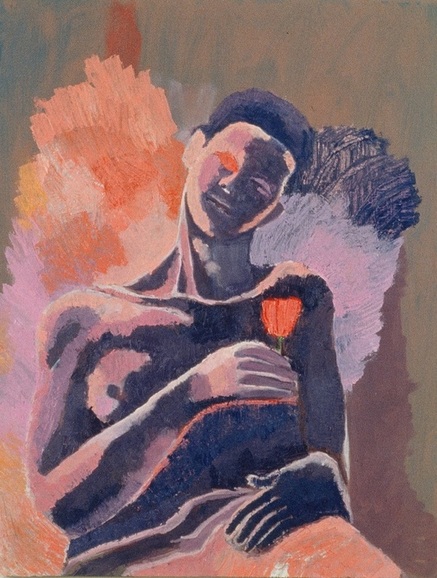 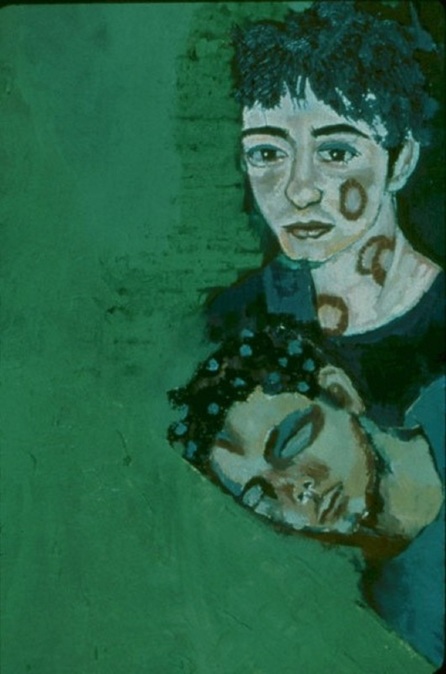 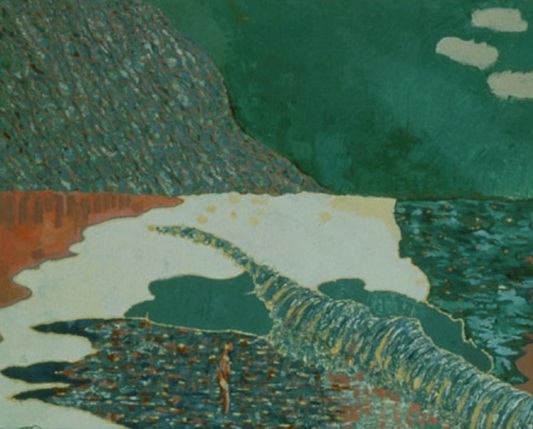 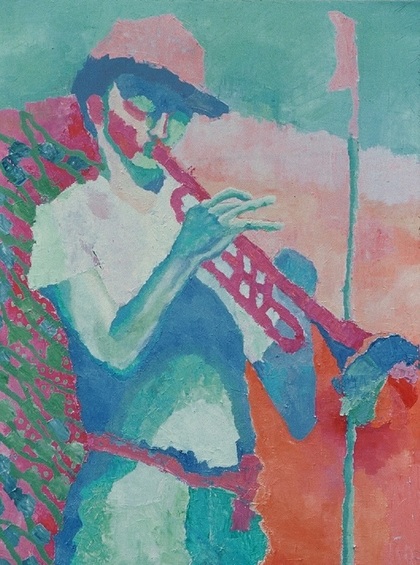 
I create portraits and images of people in an altered, dreamlike, and magical way using color, pattern, shape, and texture of paint.  I use bright, unrealistic, and skewed combinations of color to show different senses about parts of the body or aspects of the personality.   I use the way in which the paint is applied and the touch to transmit an emotion or feeling.  My aim is to create a world oscillating between dreams and reality.  I pick subjects from reality, altering them into dreamlike images by adding symbolic colors and forms.
I take pictures of people that I saw on walks through the city of Los Angeles.  Instead of painting an imaginary and symbolic world around the figure, I tried to find people who were already part of the world, yet that still embodied some symbolic aspect of it.  For example, one of my paintings is an image of a man playing the accordion.  While the painting is not photographically representational, it comes from a photo that I took.  The image is simplified, and the colors are changed to red, green, and white.  In the process of painting, I tried to capture a dreamlike feeling about the man and the music he was playing by using bright colors.  All around the figure is a thick outline of red paint, offset by a thinner red background.  This outline functions like an aura or halo of paint, its intention to imply heat and force emanating from the man and his accordion.  The simplification of the image allows for more expression in the paint handling.
One other image I painted was of a man standing on a street corner holding up a sign, a common and symbolic figure.  The painting is green, blue and purple, except for the bright red sign that the man is holding, and one of his bright red eyes.  The contrast of the colors is meant to draw attention to the sign.  Although no words are legible, the sign is a hot red to lead the viewer to wonder what it would say.  The figure is simplified and generalized because of a lack of caricature and detail.  Because of this, the man is recognized as anonymous; it could be any man on any street corner.
The colors used in my paintings are chosen for both symbolic and formal reasons.  A painting I did of a young girl holding flowers is filled with light, to show her childlike innocence.  The colors I used to represent this were mainly white, yellow, and pale shades of pink and magenta.  As the image is reworked, areas of the previous image are left showing or partly showing underneath a transparent layer of paint to convey evidence of the image changing in time.  In this painting, some areas of yellow are left showing through the ground of pink and purple.  As I started the painting, these were flowers falling off of her bouquet.   As I continued, I covered the flowers but left the yellow stains of paint showing through the background.
Using color, paint application, and touch, I painted symbolic portraits of the people I saw outside.
Powered by